We would like to thank our customers and business partners. We are pleased that we had opportunity to meet them again. 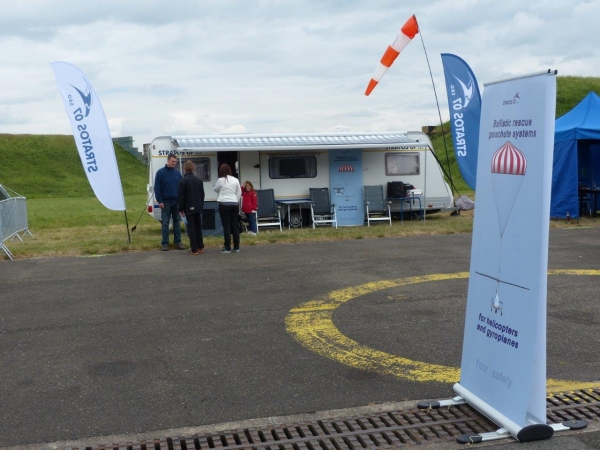 Rescue as pilot described it:

We enjoyed flight in calm weather with good visibility.At the end of the flight I took another sharp turn to demonstrate the "dynamics" in flight with trike. During the latest maneuver, which began at about 400 m, we were too slow and trike got into a steep spiral. Try to get out of this situation was unsuccessful. According to witnesses on the ground the steep spiral was described as a screw, still towards the ground. I was totally surprised by the reaction of the trike. And in a while I had no control over the trike. We were falling down very quickly; I guess 15 m / s. Then I decided to pull the handle of rescue system at about 200 meters above the ground. There was a small “explosion”. Shortly thereafter, the spiral move slowed and then the rotation stopped. I was surprised that parachute opened so quickly with no big impact. We went down from a height of 100 meters with an estimated speed of 6 m / s. We landed in the open field, first on the undercarriage.

I was completely uninjured. My passenger had slight pain in the neck / shoulders. After treatment in the hospital he was released home in the evening. I am glad that the rescue system worked and that it brought us without swinging or rotational movement to the ground. All heights and descent rate are estimated.

My sincere thanks to manufacturers for production and development of rescue systems. It showed again how much useful the rescue system is.

Thanks to sufficient rocket engine´s thrust the whole parachute was pulled out even through such a small hole, that remained after jam of cover. But the damaged parachute still was able to save the crew!

The rescue system Magnum 450 was built into the trike in a way, that it was covered with laminate sheet. The container was installed in a way that there was not enough space to falling away of the container´s duralumin cover. It would be sufficient to aim it more downwards and everything would be all right.

In this case, after the activation of rescue system the cover released, but instead of falling away and make way for parachute, it jammed in insufficient size of hole in trike´s laminate sheet.

The rocket motor cable, which pulls the parachute from the container, damaged duralumin cover. Therefore there were sharp edges that damaged the pulled parachute.

This incident should be a lesson for users to make proper installation of the rescue system. They should follow the manufacturer´s instructions or consult the installation with manufacturer. This type of rescue systems in duralumin container is primarily intended for installation in aircraft, where it is installed separately, so there is no obstacles when activated! In the case that is located behind a removable cover, the cover must be large enough to ensure smooth falling away of duralumin cover after activation! It would be more appropriate to install in this trike a rescue system design softpack.

In April 2014 our company successfully passed the recertification audit of Quality Management System (ISO 9001) and we have been awarded the new certificate. 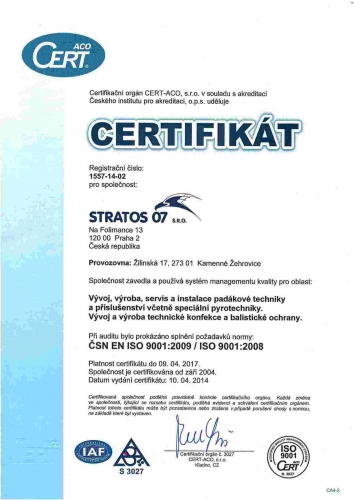 This year we also didn´t miss the exhibition AERO 2014 Friedrichshafen. Once more we attended the exhibition in collaboration with our German dealer – company Junkers Profly. The whole show had a very professional level and we were pleasantly surprised by number of visitors.

It was a pleasure to meet again our customers and business partners, with whom we otherwise have contact only on the phone or via e-mail.

Test of the rescue system in company Flying Machine

On November 18.th 2013 was made the second successful test of the rescue system Magnum 450 SSP in the company Flying Machine.

The animation of using a rescue system for helicopters

On 15/08/2013 in the north of Kulmbach airfield at about 12:20 clock the pilot had to activate the ballistic rescue system of his ultralight aircraft, which helped him to survive the emergency landing in a forest unharmed.

Anyhow the ultralight aircraft of the type "Duo Banjo" lost from one second to the other rapidly height, therefore the pilot Steffen Haselmann made the only right decision - activation of the Magnum rescue system.

Steffen Haselmann: "The sudden decent of the plane quite near to the ground, I was immediately aware, that I will not be able to get the plane in any suitable position. So I activated the rescue system at once!"

The pilot also expressed that his quick decision to use the Magnum rescue system was based on the theoretical instruction in the subjects of "pyrotechnics" and "Operational Procedures" during his pilot training. He reported that he activates the rescue system at an altitude of about 80-100 meters above the treetops.

The opened parachute slowed the fall immediately and the pilot brought gently to the ground. The system was activated by the first spinning rotation.

"When I heard the sibilance of the rocket, I was conscious - the rescue system is working. That parachute was opened, I realized by the reduction of the descend rate. Surprisingly, I could not register a significant opening shock. It can be better described as a gentle braking motion. "

Only the place of the crash was quite dangerous. It was in a dense forest, so the aircraft with a wingspan of 16 meters was badly damaged. To the astonishment of the first aider and emergency service rushing to the scene of the accident, the pilot had already left the plane before they arrived.

"The next moment my plane touched the first treetops with about 15 ° nose down, by hanging canopy I slipped smoothly through them due to the decent rate of 5 m / s. Also, the contact with the ground felt very gentle. The soft forest floor and the canopy, which got caught in the treetops, caused a very soft landing."

The young pilot survived the crash apart from minor scratches and some black spots almost unharmed. Those were probably due to the tightened seatbelt and the following exit from the aircraft.

A similar accident with an aircraft without ballistic rescue system would have been absolutely fatal, as an exit with a personal parachute in this height would have been impossible. 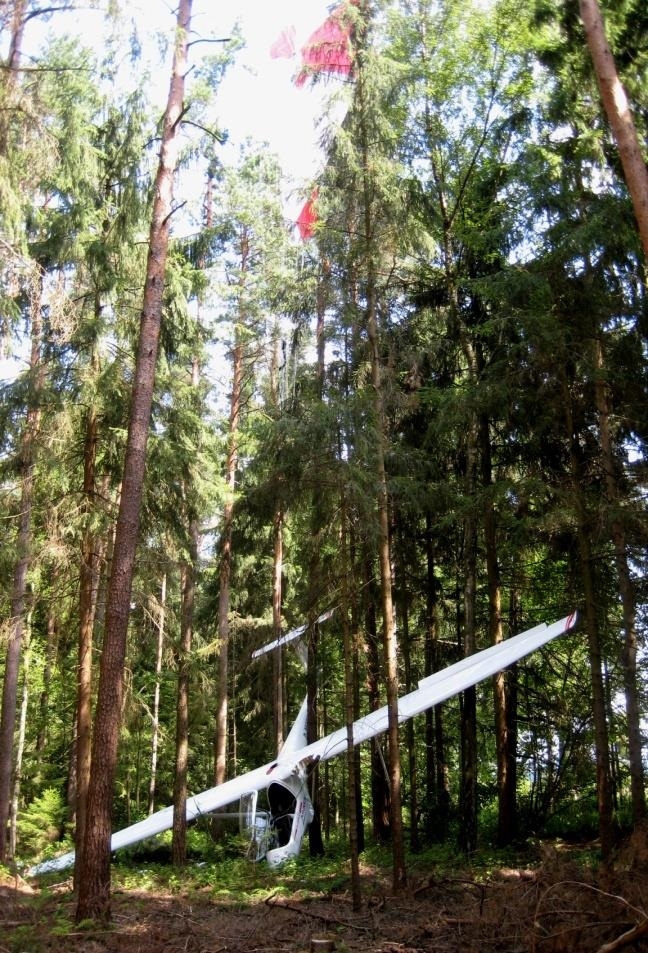 We participated in the most important European general aviation exhibition in Friedrichshafen, Germany on 24.- 27. April 2013. Besides other things, we presented our new development - parachute rescue system for gyrocopter.

After the engine failure, the pilot was forced to use MAGNUM 601 recovery system.

The aircraft landed intact on the field, 2-person crew was not injured.

AND HAPPY AND SUCCESSFUL NEW YEAR!

Test of recovery system intended for helicopters and gyrocopters

Watch our video or a sequence. 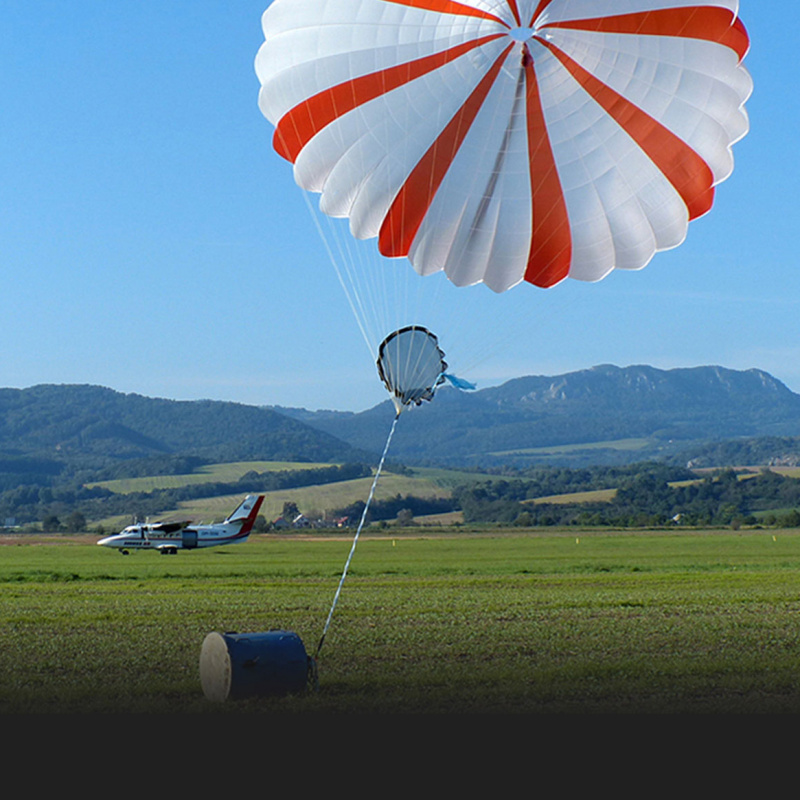